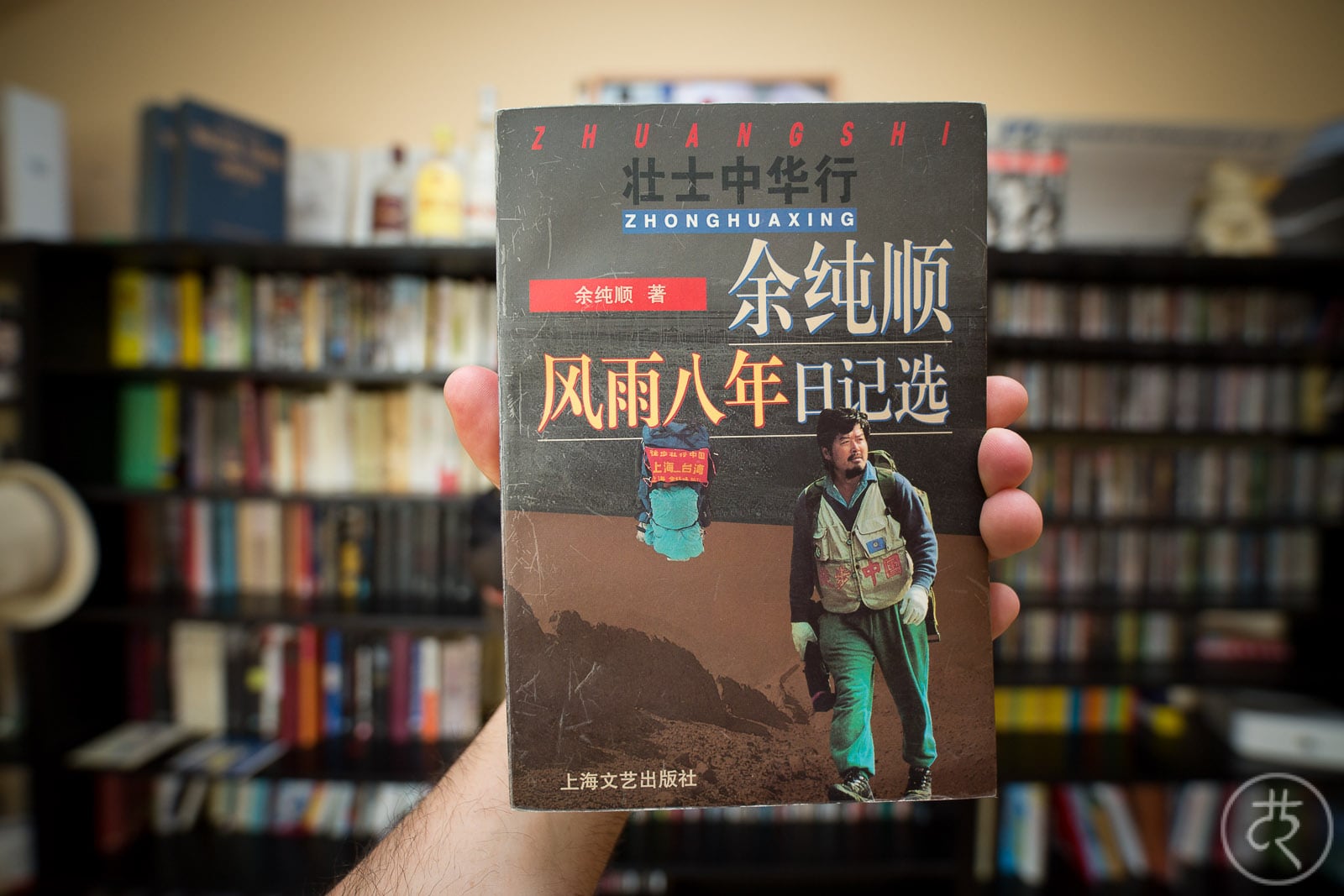 The story: in the 1980s, Yu Chunshun is just a regular dude from Shanghai. In 1988 he decides to say goodbye to his family and start walking all over China. The reason for this endeavor: it has come to his knowledge that an Englishman has announced the same plan. And Yu, being a good patriot, wants this honor for himself. So he walks.

He becomes the first person to cross Tibet on foot on all major routes. Then he attempts to tackle the Lop Nor (a former salt lake that has dried up and become a desert in Xinjiang) and dies in a sand storm.

The book is actually a diary in two volumes. The first one (Eight Years Of Hardships 风雨八年) is about his travels through anything Chinese excluding Tibet. The second one (Solo trek through Tibet 孤身徒步走西藏) is about his successful attempt to cross Tibet on foot on all 5 major routes. Both books have additional content including articles, pictures and editorial notes.

the books are too long

Yes, Yu Chunshun is without a doubt a great adventurer. He is always willing to try the impossible, and because he is so tough, he almost always succeeds. That being said, his books are mostly boring.

It’s not only because he doesn’t write that well. Some of his stories about Tibetan people (especially about the children) are very touching, and the river crossing towards the end of the second volume is an exciting adventure story.

The problem lays not in his writing style, but in the lack of editing. Yu bores us with page after page of details: what time he goes to sleep, what time he gets up, how many crackers he eats, how many miles he walks until he gets to talk to someone, how tough he is.

Both books combined add up to about 600 pages, half of which should have been omitted just to make it readable. So the question I’m asking is: where was the editor?

Well here’s the thing: Yu Chunshun is a tragic hero. He dies, leaving behind a shattered family and a dusty grave in the Northwest of China. Maybe the editors were still mourning, maybe they were scared to spoil Yu’s legacy – the words he had scribbled in his notebook during the years of his travels. So they decided to publish it all. This is of course understandable in a way, but it doesn’t help the reader.

how to read this

Here’s how to read this book: get both volumes, then read some of the diary entries of the first one. Read the last 50 or 60 pages of the second diary, the one about Tibet. Now look at the pictures and read the additional materials.

The publishers included Yu’s very last diary entries before he perished in the Lop Nor. They also included articles written by the journalists who dared him to cross the desert in the first place. And they added one little thing, an article of just a few pages, written by Yu Jinshan (余金山), Yu’s father.

It’s this short article, the father’s eulogy, that makes it all worthwhile.

“Even if they all praise him [Yu], saying ‘his spirit was unbroken, only his endeavor was unlucky’, for me, as a father, this bitter truth cannot be changed: I have lost my son forever.”

Then he tells us about Yu Chunshun’s tragic family background and about the hardships of his youth, and suddenly we begin to understand why Yu felt like he had to constantly prove himself.

But the father doesn’t stop there. When the eulogy is done, he adds a few lines:

“Today, my son is gone. I am almost seventy years old, but I feel that it is my responsibility to keep up my son’s legacy, to take over his attempt to ‘walk all over China’. As soon as his funeral arrangements have been taken care of, I will continue to walk towards the ‘end of the horizon’, and become a seventy-year old hero.”

Yu’s feat of walking all over China for such a long time is incredible. His storytelling is okayish, his writing style is lacking, and both would profit immensely from some additional editing. Some of the insights and observations he shares aren’t bad.

If you’re into long-distance walking and into China, you could give this one a try.

Also read: Ma Jian, for some drifting through China just a few years prior.