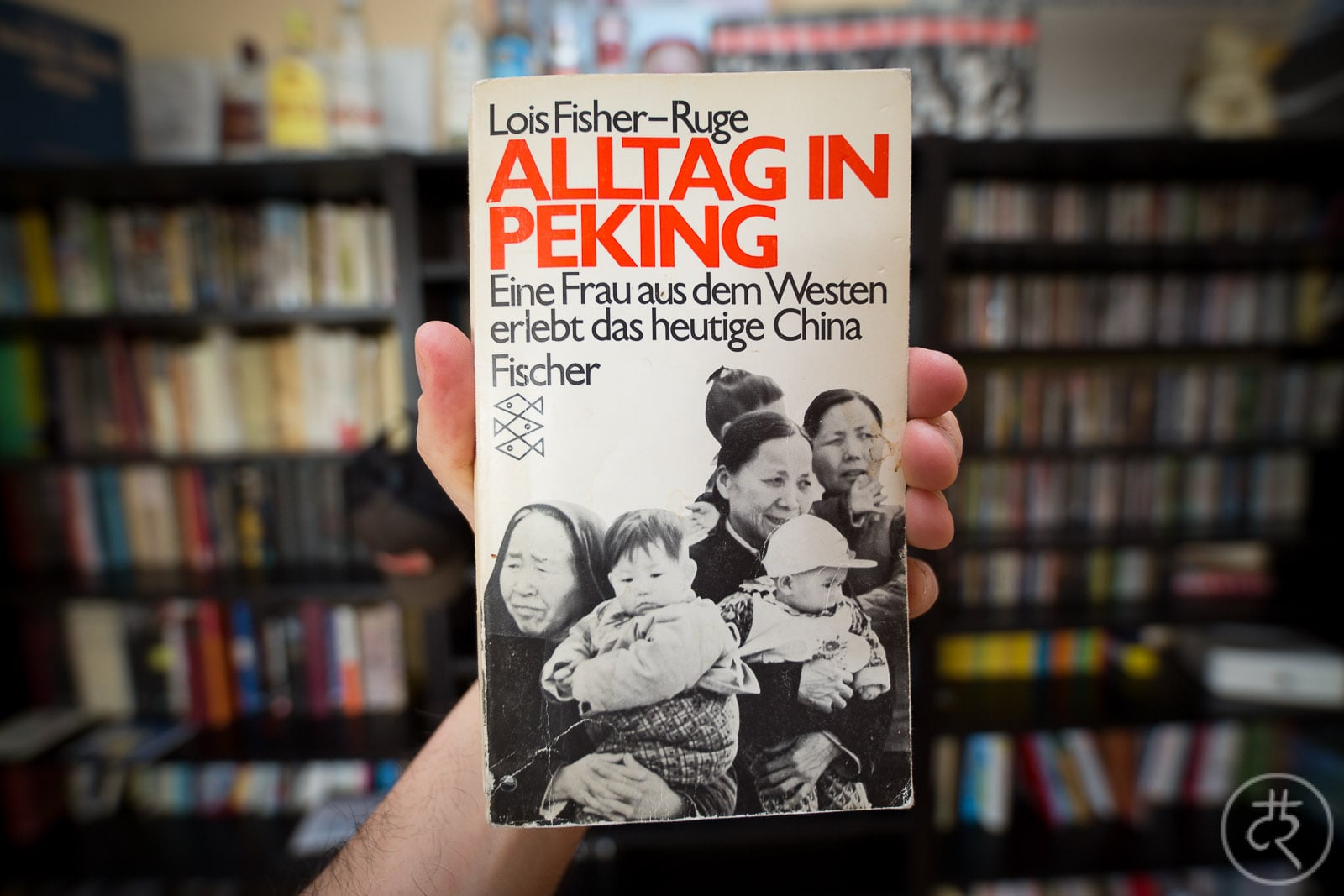 killing the siren call of nostalgia

The story: In 1973, the People’s Republic of China is slowly starting to open up to “imperialists” from the West. US-President Nixon and his aide Kissinger have been warmly received, and now a select few foreign journalists are being invited to live in Beijing for a while. Lois Fisher-Ruge is the American wife of famous German reporter Gerd Ruge. She isn’t exactly exhilarated about the idea of moving to China, but she tags along anyway.

Upon arrival, her life gets wrapped in tightly – with a personal chef, chauffeur, maid, and a translator taking care of her and her husband. Still, she manages to occasionally escape from this “expat-bubble” after picking up a bit of Mandarin and adopting the habit of riding her bike through town.

Turns out the book is awesome.

It’s not so much the story (Fisher-Ruge eats things, rides her bike, talks to people, sees a riot at premier Zhou Enlai’s funeral, lives through the Tangshan Earthquake and through Mao’s death, and then she leaves). Nor is it Fisher-Ruge’s writing style. She mostly sticks to specific details: how much does a certain item cost? What is the perceived ratio between horse carriages and motor cars on the streets? What do people eat?

Also sometimes, when she offers a personal opinion on things, she gives away a surprising degree of ignorance. For example, the low level of public security in Hongkong (compared to Beijing) makes her feel uncomfortable. This is understandable. But I would have liked for her to note that her perceived safety in Beijing is mostly due to her special status as a foreign visitor. In other words: it is the expat bubble that prevents her wallet from being stolen.

So what makes this book so awesome then?

First of all, Fisher-Ruge’s attitude toward China is a sympathetic one. Or rather, she starts out with an air of indifference and grows to appreciate China and her people. Naturally, this makes for a nice read (and it reminded me of William Lindesay‘s book).

The other thing that is special about this book is that Fisher-Ruge, with her depiction of life in China in the mid-1970s, unknowingly helps debunk a bunch of myths about China that are somewhat popular among today’s youth.

Every Chinese of the post-80s generation should read this

Obviously, all of the above is not to say that Beijing used to be less safe than today, that the air quality was worse, or that people were more indifferent towards each other. And the level of corruption has actually seen an increase in the last few decades (the bigger the cake, the bigger the share).

Also, there is always the possibility that Fisher-Ruge’s impressions of life in China are not 100% accurate.

But let’s not forget that Fisher-Ruge displays a strong sympathy for China, and that the book first came out in 1979, during a time when the future of the Economic Reform policy was not certain at all. She’s not exactly a hater.

I wish young Chinese people would read books like this one.

Fisher-Ruge’s feat of living in China as a privileged expat at the time isn’t worth mentioning. Her storytelling is okay, and so is her writing. It’s nothing special, but it’s not bad. Some of her observations are pure gold, though.

If you’re into China at the time around Mao’s death, or better yet, if you’re someone who likes to romanticize that time, read this book.

Also read: Fernão Mendes Pinto, for a book that is totally different from this one.