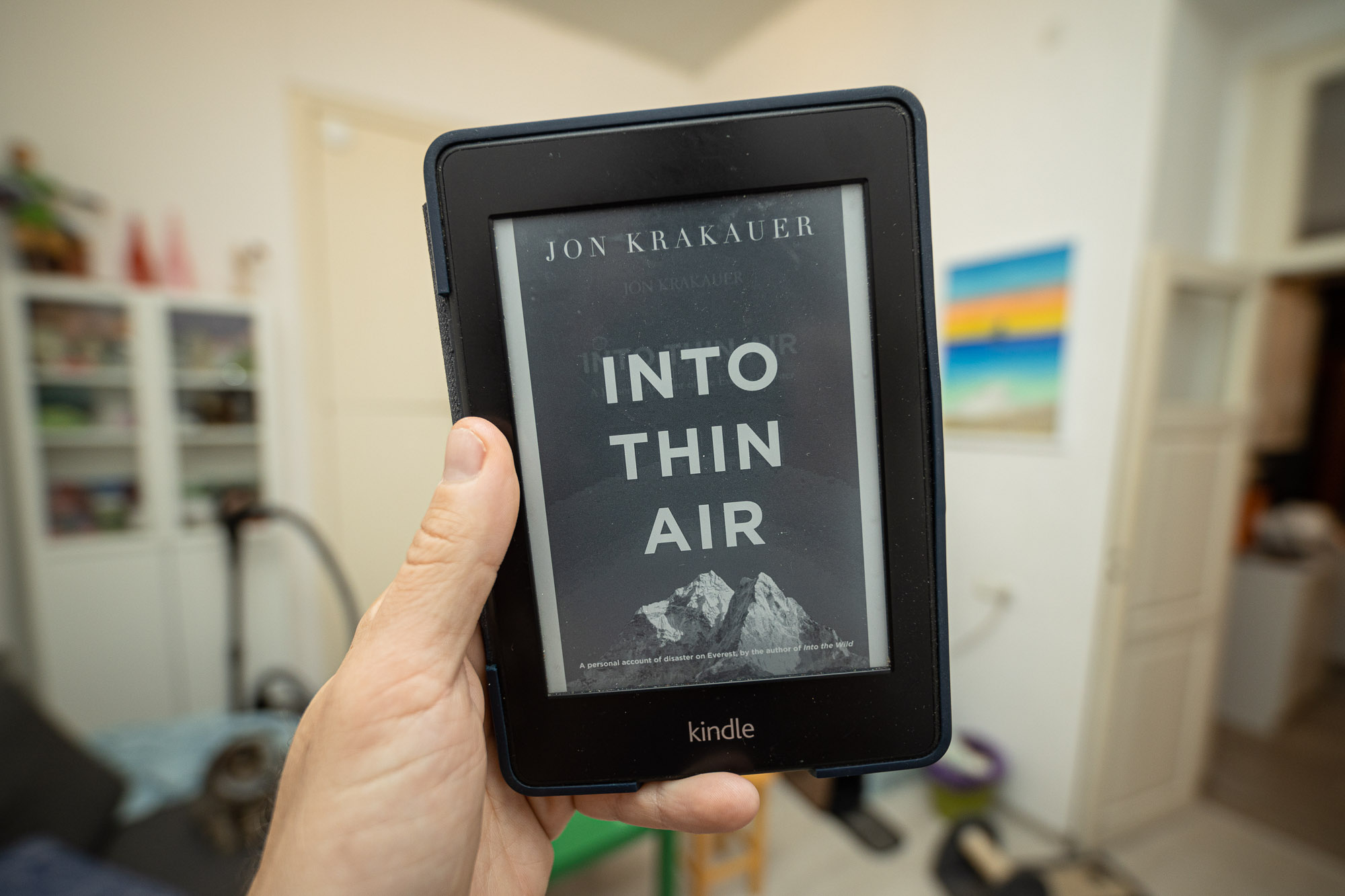 The story: in the spring of 1996, American journalist and mountaineer Jon Krakauer joins a commercial expedition to the top of Mount Everest. On the face of it, he does so because he has been commissioned to write an article about the increasingly commercial guiding business on the mountain. But in reality he also wants to fulfil a personal desire to climb the highest peak on earth.

The expedition goes awry when bad weather hits right after Krakauer’s group has reached the peak. He manages to get back down to safety, but many other sherpas, guides, and mountaineering enthusiasts die that day on the mountain.

I enjoyed the book. The story is dramatic, and Krakauer tells it well. First he lays out some of the history of mountaineering on Mount Everest, then he talks about his own passion for mountain climbing, and finally he takes us to Nepal, where he introduces the characters of the people who will try to climb the mountain during that season.

The story gets thicker with the actual start of the climb, and it becomes thrilling when the snow storm hits the mountaineers near the peak, costing many of them their lives.

During all of this, Krakauer switches back and forth from telling the story from his own perspective, as he experiences it, and from a bird’s view, zooming in on different scenes on the mountain. And sometimes he finds very good words:

“I felt emotionally anesthetized yet hyperaware, as if I had fled into a bunker deep inside my skull and was peering out at the wreckage around me through a narrow, armored slit.”

One thing that annoyed me about Krakauer’s writing, however, was how he seemed to have a habit of quoting grammatically incorrect speech from non native speakers:

“Pemba angry to me,” Lopsang acknowledged, “but I tell to him, ‘You must stay, or I will not give you job again.’ So he stays at Camp Four.”

I don’t know about this kind of thing. It adds a bit of color, sure. But is it necessary?

Another thing that I didn’t find as much annoying as I found it confusing was the amount of personas in this book. There are a lot of people between Base Camp and the peak at any given time, and Krakauer seems to find it important to talk about most of them individually. Sometimes it felt a bit difficult to keep up.

Finally, there is the issue of blame. A tragedy happened on the mountain, and whose fault was it exactly? To his credit, Krakauer talks about his own involvement, being a journalist who put additional pressure on his guide to achieve success (and therefore take unnecessary risks).

But he doesn’t stop there.

There are four main characters that crystallize out of the story:

Both Hall and Fisher die and are being iconized with emotional death scenes, leaving Krakauer in a somewhat flawed neutral role, while Boukreev ends up being a sort of semi-villain.

I’m using the term “semi-villain” because Krakauer doesn’t fail to mention some of Boukreev’s good deeds on the mountain. But overall, in Krakauer’s eyes, Boukreev seems to be the bad guy. This is epitomized in one of his quotes in broken English:

“If client cannot climb Everest without big help from guide,” Boukreev told me, “this client should not be on Everest.”

The feat of climbing Mount Everest, albeit on a guided tour, is great. Krakauer’s storytelling is awesome, and so is his writing style. Being a journalist, he does quite a bit of research.

If you like to read mountaineering stories or you are interested in the circus around Mount Everest, read this.

Also read: Robert Falcon Scott, for another account of an expedition that went wrong.