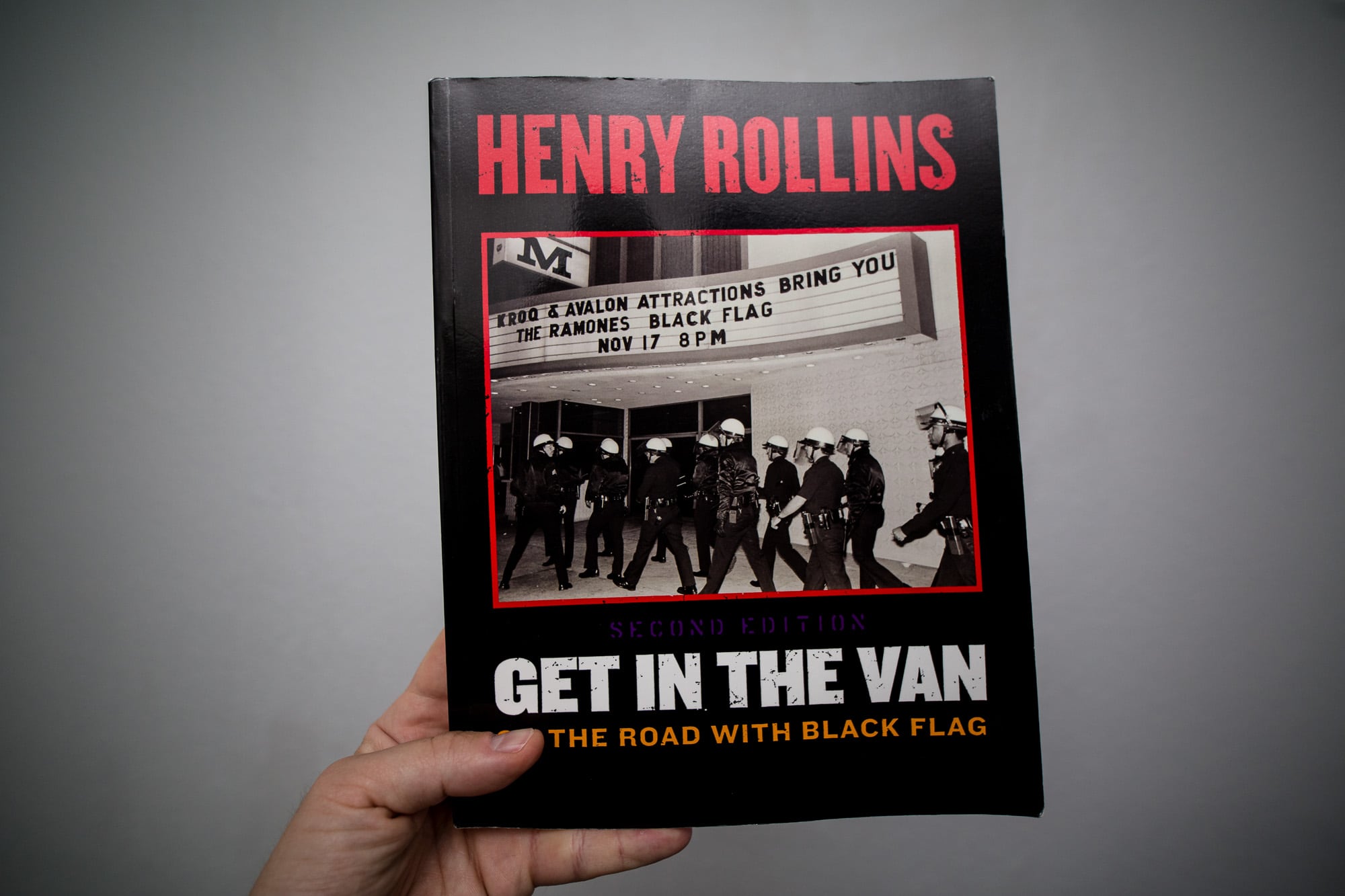 When his favorite band Black Flag asks him to become their new lead singer, he accepts. They record the album Damaged, and it goes on to become a milestone in the world of hardcore punk.

Over the next half decade, the band makes a few more records, going through several line-up changes, growing out their hair, changing their musical style, and touring extensively. Their shows take them through the United States, Canada and parts of Europe.

This book is Rollins’ tour diary. It’s about what he sees and how he sees it, about his feelings, about the music, the shows, the women, etc.

why I can’t read this in a normal way

Black Flag, or rather their album Damaged, has always been special to me. In 1993, when I was twelve years old, I had four CDs:

I loved every one of them. Back then, music was like a strange new kind of magic to me. I didn’t know that Black Flag had been disbanded for several years, and I didn’t understand much of what their songs were about. I could feel their energy, and that was enough for me.

Even today the intro to “Rise Above” still gives me goosebumps. I am telling you all of this because I don’t think I can be objective when it comes to this book.

I went and got the print edition, even though the audio book read by Rollins himself was apparently a bigger hit with both critics and fans. I guess I like reading better than listening to someone read. Also, the book is filled with tour posters and photographs from the shows, and I wanted that, too.

The book was good, especially the first half. Young Rollins is an angry guy who likes Henry Miller. His diary entries are short, sometimes even too short, and he is not shy to share his opinions about things.

Much of his earlier writing transports this kind of energy, and the way he makes fistfights come alive in his writing has an almost surreal quality. I liked reading about the hardships of the early days of touring. It made me feel as if I was there, with Rollins and Black Flag.

what’s not so good

The second half is where it gets a bit repetitive. Rollins’ diary entries get a lot longer at this point. Sometimes he just seems to be rambling about some of the bigger or smaller philosophical questions in life, and I found myself peeking at the next pages, trying to find out if there were photographs that would speed things up a bit. In other words: I got bored.

Also, Rollins increasingly comes across as a person who is constantly at odds with everything and wishes the world to revolve around him. It seems a bit like in the Black Flag song “Gimme Gimme Gimme” actually. And while this might make for some good punk show material, it gets tedious if you have to read about it for hundreds of pages.

Rollins’ feat of touring with Black Flag is cool. His storytelling is okayish, but his writing style is good, especially when is is describing the physical violence he engages in – then his writing is stellar. Some of his observations and insights are good.

If you’re into early eighties hardcore punk, then this is your thing. If you are going to read it like a travelogue, then you’re probably going to find it rather average.