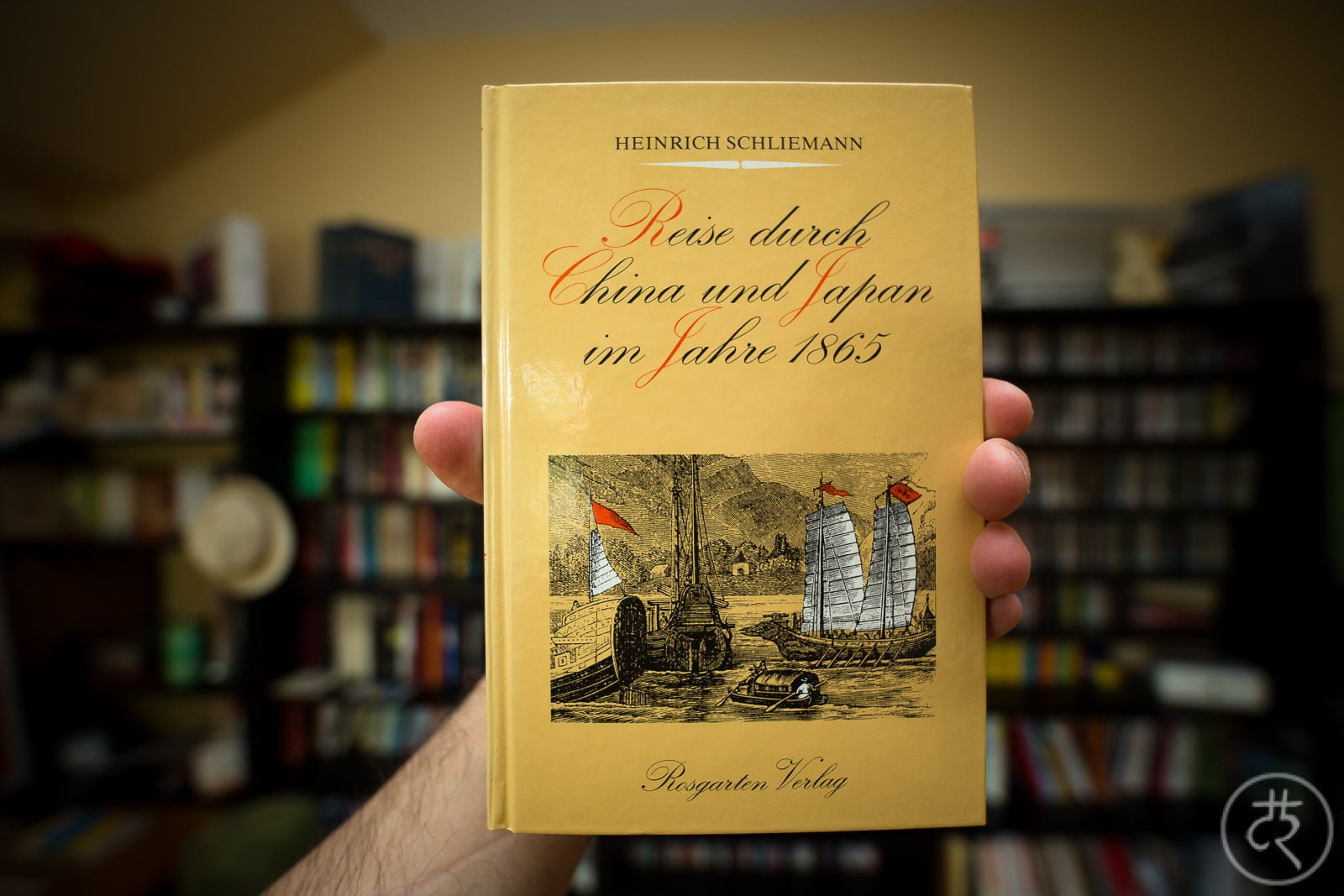 [note: I’ve been reading a German translation of this book]

The story: We’re in the mid-19th century. Heinrich Schliemann is a German businessman with a gift for languages and a passion for history who will later go on to discover the ruins of Troy.

But first, he decides to go on a journey to China and Japan, both of which are currently struggling with the challenges of modernity and western imperialism. This book is about his journey.

It’s a surprisingly thin and easy read. Schliemann is a laconic writer who likes to stick to facts. In fact, he seems to carry a yardstick with him wherever he goes, so the things he sees can be measured immediately – and accurately.

This obsession with measuring is nice for the reader who has always wondered about the exact size of the bricks used in the Great Wall (67cm x 25cm x 17cm), but it’s also quite hilarious. I couldn’t help but imagine Schliemann all over the place, taking measures, jotting down notes, then taking some more measures.

But let me get back to the book.

The story is split into two main parts. The first one is about China, which Schliemann seems to find rather disappointing. Through his eyes, we see a society that is in a state of moral and physical decay. Temples are rotting, the roads are filled with dirt, there are beggars and cheating merchants everywhere.

There is one episode though that I thought was very interesting: Schliemann is all by himself, on a watchtower overlooking the Great Wall, and he says this place has the most stunning panorama he has ever seen, anywhere. He goes on to muse about the “giants” who must have built this structure. This is only a figure of speech, but I thought it was very revealing anyway.

Yes, China in the mid-19th century was a mess. But I think there is a deeper reason for Schliemann’s disappointment – he must have had particularly high expectations for his visit to China. This is understandable, given the fact that Chinese culture has a few thousand years of written history under its belt. But maybe Schliemann is not doing China complete justice with his disappointment.

The second part is about Japan, which Schliemann absolutely loves. The cleanliness! The sense of law and order! The complete lack of furniture! Japan is just awesome.

There is a bit of a mystery here as well, though. While Schliemann is stunned by the degree of cleanliness he encounters everywhere he goes, he needs to search for more than 30 minutes if he wants to find a baggage porter who doesn’t have scabies. This doesn’t seem to make sense to him (or to us, his readers), and the explanation he offers is that it must be because of the raw seafood the Japanese eat on a regular basis. But if that’s the case, why aren’t the upper classes struck with skin ailments as well?

There is a short third part about the passage across the Pacific ocean. It’s only a few pages long though.

Schliemann’s feat of traveling through China and Japan in the mid-1800s is okayish. His storytelling suffers from the fact that he doesn’t seem to be trying to tell a story. His writing style is nice for its brevity, though. The observations and insights he shares are awesome.

If you are interested in East Asia – or rather in the clash of eastern and western cultures in the 19th century – read this.

Also read: Fritz Mühlenweg, for an account of exploration and adventure that is a bit less dry.