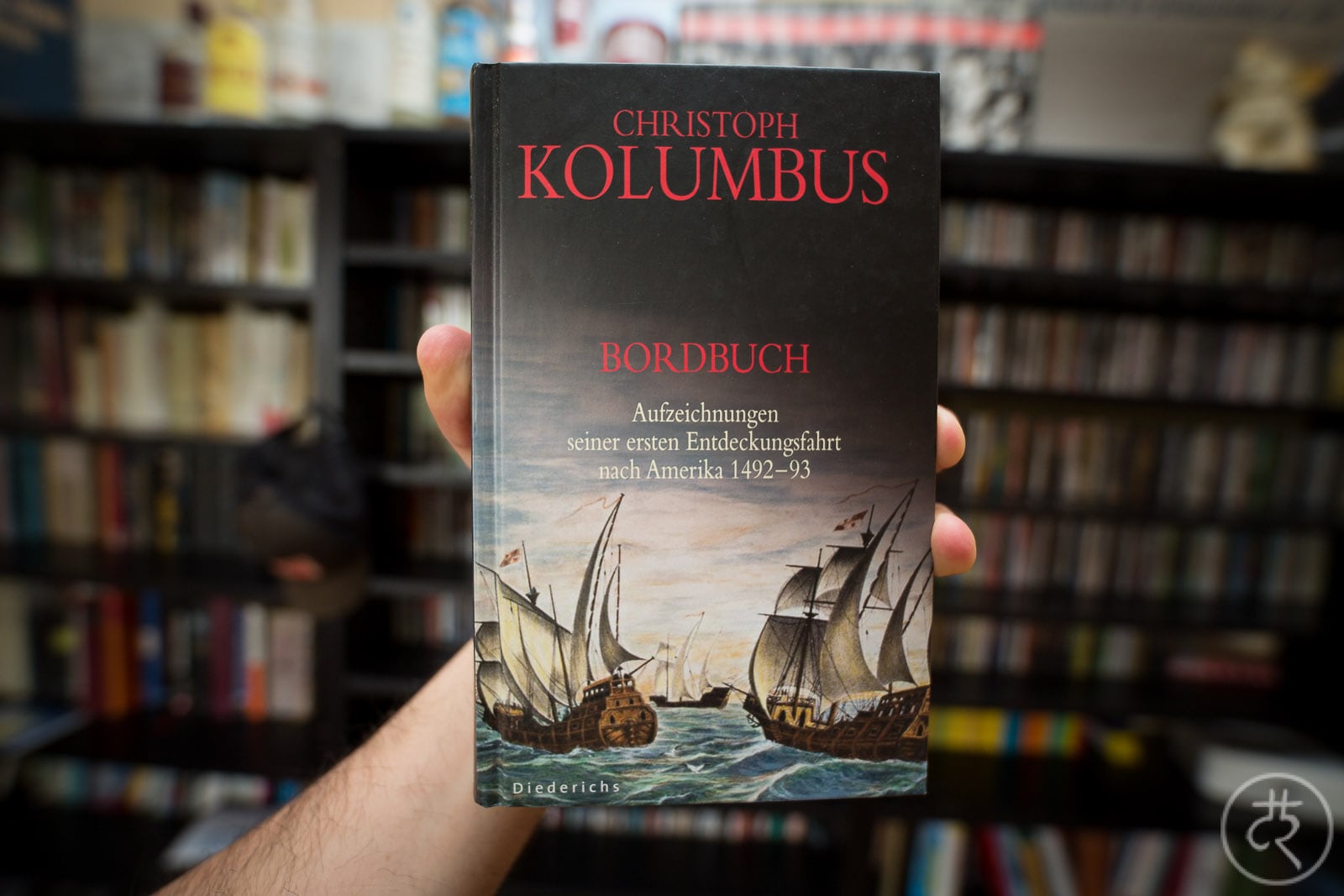 First things first: this is not Christopher Columbus’ original logbook. It is merely an edited transcript of the original log (which got lost), handed down by Bartolomé de Las Casas in the early 16th century. Some editions preserve de Las Casas’ style of writing, while others attempt to restore the original first-person perspective of Columbus’ account.

This might very well be one of the most interesting books I have ever read.

The story: in August 1492, forty-something Christopher Columbus from Genua sets sail in Spain, aiming at the Canary Islands and then West from there on. He has three ships and a dream to his name: to engrave his name in history by becoming the discoverer of a Western passage to India.

On October 12th he lands on a strange shore, which he identifies as a set of islands off the Asian coast. He meets with the people living there, communicates with them and eventually sails back to Spain, leaving an outpost behind and taking a small group of “natives” with him.

is Christopher Columbus a hard-headed “colonialist”?

I guess there are a lot of reasons to not like Christopher Columbus: first and foremost, his legacy did bring millionfold pain and destruction to the indigenous peoples of the Americas. And the outposts he left behind before his return to Europe became known for the brutality of their inhabitants.

Besides that, he seems to have been constantly on the hunt for valuable minerals wherever he landed, and even in his later years he could never be convinced that the landmass he had discovered was in fact not Asia, but a whole new continent later known as North and South America.

All of the above might be true, but this book is a surprisingly good read nonetheless: the 320 pages I have been reading never felt old or boring at all. Columbus has a great eye for details that add life to the text, and his diary entries are nicely diverse, ranging from short, laconic two-liners to long paragraphs spilling over with exuberance and excitement.

sympathy for land and people

He loves the scenery:

“I saw a number of huts and a wide valley dotted with settlements and traversed by a river. Never have I seen anything more beautiful.”

And he shows a sort of sympathy for the population:

“Nothing is more easily recognizable than someone making a gift that comes from the heart.”

Of course it’s possible that these weren’t Columbus’ true feelings – he could have written these words as a sort of advertisement for his sponsor (the king of Spain), or they might even have been the result of a textual modification by de Las Casas.

Whatever the case, the picture of Columbus that I got from the text was that of a passionate dreamer, and a very likeable one at that: there’s joy in triumph and fear in the face of danger, there is obsession and self-doubt – it’s all here, within these notes from the dawn of the Age of Discovery.

Obviously, Columbus is a child of his time, too: he finds it necessary to proselytize, he wants to find huge amounts of gold for his king, and he is always looking for new territories to add to the Spanish dominion. But he is certainly not a conquistador.

Here are his first words about the first people he meets on the first island he lands on:

“In recognition of the fact that they were people who could better be converted to our Holy Faith by love than by the sword, I was looking to make friends with them…”

If only the Colonial powers had lived up to these words.

Columbus’ feat of discovering the New World is awesome – even if he never understood what it was he had done. His storytelling is okayish. It’s an edited journal after all. His writing style is decent. And his observations are very interesting, given the historical background.

If you’re into the Age of Discovery, read this.

Also read: Marco Polo, because Columbus read him, too.